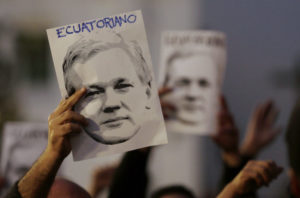 Remember when it was obligatory to call Julian Assange paranoid?

That changed in March when the first of 18 US indictments confirmed designs to get him. All charges pertain to Wikileaks data that made him famous in 2010. Hard proof that hounding ensued from those initial releases accordingly forced the punditry to reconsider at least one of its armchair diagnoses of Assange.

Though most are unaware of the details, such hostile pursuit has concerned more than a few countries and institutions. UN Special Rapporteur on Torture, Nils Melzer, recently stated that in “20 years of work with victims of war, violence and political persecution, I have never seen a group of democratic states ganging up to deliberately isolate, demonize and abuse a single individual for such a long time.”

This follows upon the UN Working Group on Arbitrary Detention’s finding in 2015, reiterated in 2018, that Assange had been continuously arbitrarily detained in one from or another since 2010.

The official US reaction to Melzer’s report has naturally been to decry the content. It starts upon this with a certain fable of righteousness, which implies that a dog snarling into the hole of a rabbit does not confine it there:

Mr Assange voluntarily stayed in the embassy to avoid facing lawful criminal charges pending against him. As such his time in the embassy did not constitute confinement and was in no way arbitrary.

Like the term ‘confinement,’ the word ‘arbitrary’ is a weasel in this particular fable. It does not function in human rights law to imply any lack of rationale, but to identify the rationale of some authority as crucially unprincipled. Where such a fault applies it is likely to be ignored, misrepresented and/or distracted from by the culpable authority. Hence, as in the quote above, they tend to assert some righteous motive, real or fictional, as centrally vindicating.

It is common and wrong for those reprimanded to respond this way, since their place is to respect the findings of UN appointees and if necessary, reasonably correspond with them. The entire point of international law is that countries are legally held to account. In terms of the presently relevant human rights covenants, this involves a regime of independent assessment as to whether they are complying with the covenants they ratified. No brute enforcement applies here and the system should work perfectly well without it, if only the signatories abide by it in good faith.

In this primary and neglected context, the account that the US has given of itself has been a spectacular self-incrimination. The two sentences quoted above happen to assert the main premise of Assange and appointees from the UN who saw fit to defend him. For it is plainly implied in the quote that staying in the embassy was the logical means he appropriated to avoid negative repercussions intentionally prepared for him by the US in response his publishing.

The US is accordingly reduced to pretending that, as claimed above, the charges are internationally and nationally lawful. There is nothing to back this up other than legal paragraphs that have been long shunned, relentless obfuscation and a bully’s glare. The charges have been nigh universally denounced as an unprecedented threat to democracy which contradicts the letter and spirit of the US first amendment.

The response to Melzer from the US accordingly backfires and largely because its position from the outset has been foreign to reason. Its officials were obliged to reply to Melzer and apparently felt they managed to do this without committing to an abortive position. If so, they were deeply mistaken for reasons above, and also below.

The letter took exception to any notion that narratives about Assange, or indeed “commentary” in general, could be “cruel, inhuman or degrading…as defined by the Convention on Torture.”

Exclusion of the linguistic modes of relevant abuse is, however, clearly tendentious and searching the terms reveals that, contra the claim, they are nowhere defined or otherwise relevantly qualified in that convention.

This apparent chicanery culminates in the charge that, in virtue of finding fault with injurious disinformation, Melzer’s report has “dangerous implications for freedom of expression.” There is one clear sense in which that is true. An emerging sport of persecuting publishers could become endangered if human rights law had a chilling effect upon smearing them.

These positions taken by the US are in reaction to Melzer specifying concerted defamation as contributing to the debilitating and life-threatening persecution of Assange over a decade.

Without that malicious campaign, none of the gross injustice that he has endured, or which still looms, could have gained a foothold. Complicity of the press is therefore at the heart of this story.

Much has been said of the leading role taken by the Guardian here, but consider this deceptively bland token from the Washington Post which featured in its report on Melzer’s earlier statements:

Assange regularly complained about how Ecuador treated him while he took refuge in a corner room of its red-brick embassy. He unsuccessfully sued the Foreign Ministry last year over demands that he pay for his medical bills and clean up after his cat — among other conditions he said were intended to force him from the embassy. The Inter-American Commission on Human Rights also dismissed his complaints.

The first critical omission here is the reason his mentioned suit did not succeed. It was mindfully passed by an Ecuadorian judge into a fenced pit, previously known as Ecuador’s Constitutional Court. This had been shut down two months before Assange’s suit and was rebooted another three months later, with all-new, US-partial judges and a backlog of 13,000 cases.

So Assange’s team approached the Inter-American Commission of Human Rights, which did not dismiss his complaints, as misreported above by the Post. Rather, it admonished Ecuador not to violate his rights by breaking asylum law with an act of expulsion, as starkly threatened in its foisted “protocol.” The IACHR refused nothing to Assange besides precautionary measures to prevent this expulsion, which transpired a month later, to their natural embarrassment. These points only further establish Melzer’s finding of illegal abuse by Ecuador and decimate the tales from the Post.

Also unmentioned were Ecuador’s included prohibition on his free expression and a crackdown on privacy of his visitors. Instead, Assange was portrayed as whining about such things as medical bills and pet care. Yet Ecuador never paid a health bill for him and nobody ever thought to ask them to. Nor did Assange or his legal team ever protest any stipulation about his cat, except as a baseless insinuation of neglect on his part, which was strategic and virally effective.

Fidel Narvaez, consul at the embassy for the first six years of Assange’s stay, witnessed the beginning of his persecution under the new President Moreno. Narvaez describes Assange a friend whose relations with permanent staff were always respectful and abidingly positive. The media chorus that “he wore out his welcome” thus evinces horrendous incompetence or worse. He was unwelcome only to political enemies in Ecuador, and that from the day he sought asylum. Moreno revealed his position here by speaking of Assange as “stone in the shoe” and “inherited problem,” while former President Correa remains outspoken in defence of Assange and denounces Moreno for betraying his party and country upon taking power.

The informed side of this controversy is not the orthodox one and Melzer has called the bluff of a lie-infused Western establishment. Hence all that is required to win this debate is to force it. That is why he speaks up, with hard and documented facts, and why we must follow suit.