Our species—Homo sapiens sapiens—originated in Africa about 40,000 to 130,000 years ago.  Even before 130,000 years ago our ancestors were exposed to certain stimuli—from other members of our species, and from the physical surround—and engaged in certain behaviors—especially behaviors related to the acquisition of sustenance, such as gathering, hunting, and even scavenging.  Because both occurred over an extremely long period of time, our ancestors became biologically “designed” to receive certain stimuli and to engage in certain behaviors.  In addition, because our ancestors lived “outdoors” in small groups, our ancestors also became biologically “designed” for life “outdoors” in small groups.

During the long period of time prior to the Agricultural/Neolithic Revolution (which began about 12,500 years ago), our biology changed very slowly; psychologist David P. Barash has used the word “tortoise” to refer to that fact.  During that period the way of life of our distant ancesors was also “tortoise”-like, of course.

When the Neolithic/Agricultural Revolution got underway, however, new ways of life began to develop (ones increasingly based on agriculture); and because those new ways of life were increasingly sedentary, that fact enabled groups to grow in population size—and that growth resulted in certain effects of great importance.  The most important of those effects was the beginning of the exploitation of some by some others, leading to the creation of social classes and growing inequality.

As societal changes were occurring (termed the “hare” of change by Dr. Barash!), human biology continued to remain basically the same.  The Discrepancy that thereby began to develop between (a) the way of life for which our ancestors had become “designed” and (b) the new ways of life that were developing itself became a factor that impacted human life negatively—members of the lowest emerging class being most impacted negatively, of course. 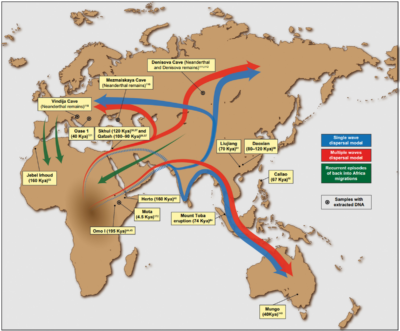 Rather than pursuing that point further here I choose to note that only some of our distant ancestors remained in the area, in Africa, of our origin.   The map to the left (source) illustrates what’s believed regarding that dispersal.

As some of our distant ancestors left the area of our origin, they encountered environments that differed from their area of origin, which fact had an impact on their sustenance activities and, therefore, their ways of life to a degree.   And, with the passage of time, there also occurred some biological changes in migrants, as they adapted biologically to the new environments.  Those new environments also forced a need to protect oneself from the new “elements,” so that developments in clothing and shelter also occurred, of necessity.  Donna Hart and the late Robert W. Sussman would add (in their Man the Hunted:  Primates, Predators, and Human Evolution, 2018) that our ancestors were a prey species also had implications for them.   (Here’s a review of the book.)

Most of the problems that we humans currently have likely could be traced to the Discrepancy that began to occur as agriculture began to displace hunting and gathering as the main source of sustenance for humans.  Indeed, Dr. Jared Diamond declared, in 1987, that that replacement was “the worst mistake in the history of the human race”!  Dr. Diamond wrote, for example:

Besides malnutrition, starvation, and epidemic diseases, farming helped bring another curse upon humanity:  deep class divisions.  Hunter-gatherers have little or no stored food, and no concentrated food sources, like an orchard or a herd of cows:  they live off the wild plants and animals they obtain each day.  Therefore, there can be no kings, no class of social parasites who grow fat on food seized from others.  Only in a farming population could a healthy, non-producing elite set itself above the disease-ridden masses.  Skeletons from Greek tombs at Mycenae c. 1500 B. C. suggest that royals enjoyed a better diet than commoners, since the royal skeletons were two or three inches taller and had better teeth (on the average, one instead of six cavities or missing teeth).  Among Chilean mummies from c. A. D. 1000, the elite were distinguished not only by ornaments and gold hair clips but also by a fourfold lower rate of bone lesions caused by disease.

And Eugene Linden, in his Affluence and Discontent:  The Anatomy of Consumer Societies (1979), demonstrates no awareness of the occurrence of a Discrepancy, but the thesis of his book—that our history has taken a downward course, rather than being a story of “progress”!—is consistent with what one should expect, were the Discrepancy the key causal factor in our history.  Linden concluded his book by referring to the possibility of an “apocalypse of the consumer society.” (p. 178)  This was an extremely prescient remark to make 41 years ago, in light of; e.g., this article from 2018 that describes “Near Term Human Extinction in 5 Acts”!

As one reads Linden’s history, one may very well conclude that our history has been determined, so that there’s no point in trying to change the direction of our history.  However, as one with 3 children and 5 grandchildren, I must believe that that course can be changed, and in my A Road to Survival? and much shorter Viking Villages for Today I present my idea as to how our species might be “saved.”

I should add that my “plan” involves a return of sorts (to hunter-gatherer existence), at least in the sense of living in a smaller social unit, a “company-town ecovillage.”