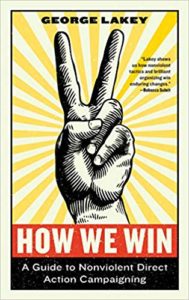 Long-time peace, justice, democracy and lgbtq activist and trainer George Lakey has written a book, How We Win: A Guide to Nonviolent Direct Action Campaigning, about the strategic centrality to movement-building of the approach of nonviolent direct action campaigning. Built upon his decades of organizing experience going back to the ‘60s civil rights movement, there is a great deal of generalized wisdom all throughout it.

He goes on: “Campaigns are very different from protests because they are built for sustainability and escalation. The four brave Greensboro, NC students who ignited the civil rights sit-in movement on February 1, 1960, did not plan a one-off protest; they understood that they could not desegregate the lunch counter without returning again and again.”

The tactics of nvda inevitably create polarization. But Lakey explains that this is not a bad thing: “Heat creates volatility, in metal and in society. It breaks up crystalized patterns. It makes possible something new to replace the rigid oppressive structures that express themselves through sexist and racist violence, endemic poverty alongside extreme wealth, environmental destruction, political corruption and militarism.”

Over the course of the book Lakey includes interviews with three other nvda campaigners and trainers. One of them is Daniel Hunter, an African American man in his late 30’s. I appreciated this interview for its focus on the importance of creating a different kind of culture within a movement if it is going to reach its objectives, “developing a kind of counterculture that prefigures the society they hope to build.” There is also helpful commentary on the class differences within organizations and movements and the importance of recognizing and addressing those differences when they play themselves out in negative ways.

Lakey in the latter part of the book addresses this issue: “Professional middle-class people, for example, are brought up to defer gratification and internalize rules, take an interest in process, use language fluently, set goals over time and plan to achieve them. . . Conflict is to be avoided or quickly resolved—promotion in management and teaching goes with the ability to keep things working smoothly.

Much of working-class people’s behavior is managed by others, so many of us find inner freedom in breaking rules and not delaying gratification. Action for us is more important than language. . . Conflict is more acceptable, even expected, as is expression of emotions like anger. Our orientation is more to people (the team, the gang) than to linear processes leading to productivity down the line.

Lakey addresses the issue of violence vs. nonviolence in a helpful way. Though committed to nonviolence personally, he doesn’t put down tactics of violent, even armed, self-defense. He spends several pages describing the development of the Deacons for Defense during the height of the civil rights movement in the early ‘60s. In dialogue with Martin Luther King, Jr. and other advocates of nonviolence, they played a constructive, protective role. Lakey reports, “The Deacons were reportedly careful not to step over the line from protection to retaliation; there are no recorded instances of them attacking whites for previous assaults on blacks.”

While the book is about all the various aspects that go with successful nvda campaigning, Lakey makes clear that he supports the development of a “movement of movements,” an alliance across lines of class, race/culture, gender, sexuality and more that can effectively be about the process of social and economic transformation.

I have one small and one much larger difference with what was written. The small one is to disagree with the position taken in the book that marches and rallies that are not explicitly part of an on-going nvda campaign are of little value. Does that mean that the January 21, 2017 Women’s Marches of millions all over the country were not important, even though not planned as part of a long-term nvda campaign? They were important, critical really, to strengthen the morale of the people’s resistance to Trump and to show the world that Trump in no way spoke for a majority of the US American people. There are many other examples that could be pointed to of where marches and rallies played an essential role in movement-building or for an important, specific objective.

The much bigger difference is Lakey’s downgrading of electoral activity as of little strategic importance. He writes that “this is one of those times when campaigns can yield change worth the struggle and the electoral arena cannot.”

So the Bernie Sanders campaign, and also the Elizabeth Warren campaign, are just part of the same old, same old, duopoly politics that progressives have been struggling against forever? No, they’re not, certainly the Sanders campaign is not. AOC getting elected is not, and there are a number of other examples.

Right now, from a strategic movement-building standpoint, public, active and monetary support for the Sanders and/or Warren campaigns (I’m a Bernie supporter) is one of the most important things any of us can do. It is also—not a small thing–a huge historic responsibility. We all have to work to prevent Trump/Republican victories in 2020 for many different reasons but especially because of the extreme threat they present to the future survival of humans and other life forms on the earth because of their climate denying, pro-fossil fuels policies.

What about a nvda campaign by those deeply committed to that organizing approach over the next 11 months, with the Trump Republicans as the target and their removal from power as the objective? If done well, that could be an extremely important support to the essential work of getting out a massive vote, hopefully for Bernie or Elizabeth as well as down-ballot progressive others, in November of 2020.