Characterizations of the Tax Cuts and Jobs Act have followed agendas – its opponents maintaining it is a bill for the wealthy, and its supporters arguing that the bill fairly satisfies all economic levels.

A previous article, Failure of Trump Tax Cuts, analyzed the effects of the Tax cuts on the economy and showed that tax cuts do not pay for themselves; they do not generate additional revenue that compensate for the loss of government receipts. This article analyzes tax cut effects on individual wage earners. Four scenarios, representative of the tax paying public in years 2017 and 2018, are presented.

Effects on wage earners are not the sole means for evaluating the worth of tax bills; other factors will be considered.

The results for single taxpayers, using the standard deduction, are shown on the left in the following table.

The single taxpayer in 2018, using the standard deduction, had a $1950 advantage in taxable income compared to the single 2017 taxpayer. Because the tax rates were also lowered in 2018, a single taxpayer of equivalent gross income gained another advantage and paid less tax than in 2017.

Which earning group did the reduced taxes most benefit?

By absolute figures, the higher the earnings, the greater is the benefit. However, a more accepted manner for examining the figures is by proportion. By these criteria, the lower waged earners received the greatest benefit — 21% for low wage earner, 18% for high wage earner, and 9.3% for ultra-high wage earners.

The results for single taxpayers, using itemized deduction of $16,000 deduction, are shown on the right of the table.

The results for the married taxpayer, using standard deduction, are shown on the left in the next table. 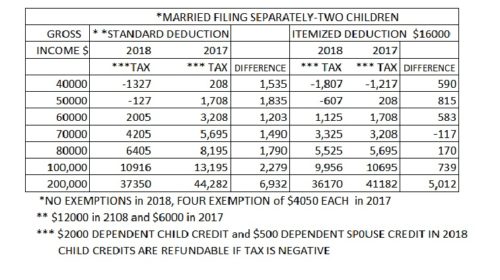 In 2017, this type of taxpayer was able, from four $4050 exemptions, to add a deduction of $16,200 to the standard deduction of $6000. In 2018, no exemptions were allowed, even for married families. Offsetting this disadvantage were the child and spouse credits. In 2017, each dependent child, created a $1000 tax credit, directly off the bottom line of the tax statement. In 2018, each dependent child created a $2000 tax credit and a $500 tax credit was allowed for the spouse. In 2018, the child tax credits are refundable (not the spouse credit), which means a negative tax, up to $1400, is refundable.

The higher tax credits in 2018 enabled all of these types of married taxpayers ($4500 tax credits) to reduce their taxes in 2018. Note that the difference in taxes between the 2018 single taxpayer using the standard deduction and the married taxpayer using the standard deduction is exactly $45000. In this scenario, the absolute tax gain was almost equal between all wage earners, except the ultra-high wage earners. Proportionately, the lower wage earners received the most benefits.

The results for married taxpayers, using an itemized deduction of $16,000, are shown on the right of the table. In this case, by itemizing deductions, just as for the single taxpayers, the 2018 married taxpayers lost the $6000 advantage they had compared to the 2017 taxpayers. The combination of loss of this advantage, together with the difference in tax credits and tax tables for the two tax years, made erratic differences between taxpayers from the two years. Generally, the absolute advantage for the 2018 taxpayer was small, even going negative for middle-income wage earners.

For this scenario, only the ultra-high wage earners managed to maintain a distinct advantage in the 2018 tax year. The low wage earners had a decent advantage, but the $1400 limitation in the tax credits limited the advantage.

Married taxpayers with children, who also have no exemptions in 2018, have a $500 tax credit for the spouse and a $2000 tax credit for each child. Regardless of the taxable income, all taxpayers receive the same credit. Is this fair or logical? Should the lower income groups, in which the care of a dependent child is a greater percentage of available income and, therefore, a greater financial burden, receive more benefit? Tax credits are a correct approach, but shouldn’t they be inversely proportional to the income? As an example, a wage earner with dependent children, could receive a tax credit by the formula

where N= number of dependents, K = Tax Credit for one dependent, I = income, and TC = Total tax credits.

Although the Tax Cuts and Jobs Act managed to save all 2018 wage earners something in their taxes, the savings beg another question, “Were the benefits sufficient to warrant the Tax act?” Entering into the discussion is that the reduced taxes increased the federal deficit. Regarding the entire situation from a total perspective, we have the increased deficit essentially financing the tax cuts. Wage earners received a temporary loan from the government, which should be repaid one day by increased taxes. Should be, but not definitely – the deficit monotonically increases with no regard of ever reducing it.

Going further, why has the administration bothered to spend huge dollars for preparing, legislating, and managing new income tax policies that gave $6000 to people who already had after tax income of $160,000, and served to increase the federal deficit and support their largesse? Why did it not keep the same tax legislation and use the costs incurred for the new tax legislation together with the monetary benefits that occurred with the new legislation and use the total revenue to assist the least advantaged citizens of the American economy?

(1) The Tax Cuts and Jobs Act mainly favored those using the standard deduction.

(2) From a proportional saving perspective, lower wage earners gained mostly from the Act

(3) The fact that the Act was not budget neutral, and increased the deficit, its effectiveness is definitely judgmental.

(4) A more meaningful and fair Tax Cuts and Jobs Act gives more decisive benefits to all low wage earners and serves to redistribute the wealth.

(6) The tax credits gave equal weight to all income levels, which does not seem fair or logical.

(7) The most debatable feature of the Tax Cuts and Jobs Act is that it assumes that the function of income taxes is to regulate consumer purchasing power rather than provide adequate revenue for government programs.

Americans for Tax Reform and Grover Norquist take note: There is no evidence that income tax cuts pay for themselves or stimulate the economy. Until poverty is eliminated, tax cuts are meaningless if they only give more funds to those who already have adequate means to live.